Academy Pittsburgh provides some of the most affordable and accessible educational pathways to high-paying jobs. In doing so, we help regional businesses prosper.

By the end of 2021, over 220 people will have graduated from our web developer boot camp. Over 55% of our participants come from groups of people underrepresented in the tech workforce. About 82% find full time jobs in tech within 9 months of graduation. Average starting salaries are over $58,000 per year. The average wage of Academy Pittsburgh alumni that have moved on to their second job is $75,292. Most make that move within two years.

We operate on an income share agreement model. Graduates who find jobs pay back 10% of their gross income for 24 months. On average, participants pay back $11,600 for their education.

Of the 162 companies that have hired Academy Pittsburgh graduates, 99 are located within 50 miles of the City of Pittsburgh.

The average salary earned by a CMU computer science undergraduate is $114,610.

Between 2017 and 2020, CMU graduated 673 undergrads from their School of Computer Science. 119 chose to stay in the region. About 42 went to work for Pittsburgh-based businesses. If you factor in masters students from the school of CS, that number only rises to about 70 new tech workers for the region each year. The rest went on to pursue an advanced degree or moved.

Academy Pittsburgh has an annual operating budget of $272,000. Each year, CMU generates around $38,000,000 of income from tuition charged to computer science undergrads.

Academy Pittsburgh looks forward to seeing the long term equitable economic impact our alumni have as they choose to live, work, and thrive in the region.
‍

Over the past four years Academy Pittsburgh placed roughly twice as many web developers into Pittsburgh companies as Carnegie Mellon University. The cost incurred by a CMU undergraduate is roughly 20 times more than that of an Academy Pittsburgh boot camp participant. It takes approximately 16 times longer to get a person work-ready for businesses in the region. 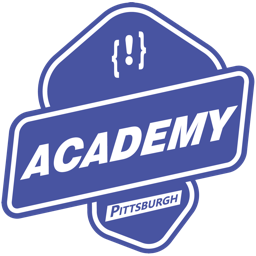 Thank you! Your submission has been received!
Oops! Something went wrong while submitting the form.